Coach Shanahan and Learn to Win

Learn to Win sat down with John Shanahan, the head football coach at Laguna Beach High School, to talk about his experience using the platform.

With the COVID-19 pandemic, football programs have been forced to adapt and use new technologies. Laguna Beach did all of their spring installs on Learn to Win, not meeting as a group throughout the spring and summer.

Coach Shanahan attested that the spring installs on Learn to Win were “hugely successful.”

“The retention is dramatically higher than it was in any of the conventional ways we’ve used as a coaching staff.”

Instant Analytics
He said with Learn to Win, his coaching staff uploads and distributes content to players, with the ability to monitor how that content is received and how engaged athletes are.

Because of Learn to Win’s lesson and quizzing analytics, Coach Shanahan said his staff no longer has to guess at what his players are thinking during a 20-player meeting in a locker room. Now, coaches can see when their players are struggling and when they’ve done an effective job of coaching.

After using Learn to Win for installs, Coach Shanahan believes the process is much deeper than a conventional whiteboard install.

Players enjoy taking lessons and quizzes on their phones and like the user-friendliness of the interface.

One strategy that the Laguna Beach staff uses to engage with their players is putting a time cap on quiz questions. That way, they can tell players to take a quiz the next time they have 5 minutes free, knowing that the quiz will be concise and brief. 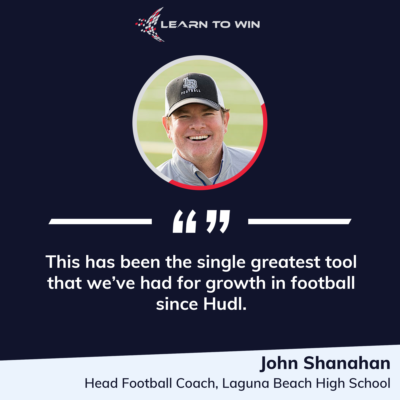 Overall, Coach Shanahan recommends Learn to Win to coaches of any team sport because ultimately, better engagement with athletes makes you a better coach. With a simple content-builder, the ability to redistribute content year-after-year, and insightful analytics, Learn to Win has transformed the way that Laguna Beach Football teaches.

“[The pandemic] is kind of a blessing in disguise, because I’m a creature of habit, I’m not into major changes. But when you’re forced, due to different variables, to do some different things, it’s an opportunity for growth and this has been the single greatest tool that we’ve had for growth in football since Hudl. This is the best thing we’ve seen in the last 20 years.”